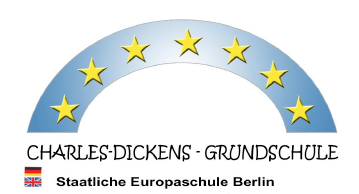 Charles Dickens Primary School was opened in 1971. In 1992 the Europe School branch was added. The school is named after the famous author and philanthropist Charles John Huffam Dickens (1821 – 1870). Charles Dickens Primary School has both an English-German Europe part or branch and a regular German branch. The school is located between the Olympic Stadium and Berlins’ Grunewald forest, with convenient connections to Berlin’s public transportation system (BVG). A third building was added to the spacious school grounds in 2007. The 450 pupils at Charles Dickens Primary School have access to a well-stocked English-German library, 2 well-equipped computer rooms, a pupils’ kitchen, a large cafeteria and a huge green playground.

There is nothing so strong or safe in an emergency of life as the simple truth.